An African agenda is needed at the World Trade Organisation

The COVID-19 pandemic is testing global food and social protection systems at an unprecedented scale. The spread of the pandemic is disrupting food systems and undermining the food and nutrition security of households. Projections by the World Bank show that globally, the pandemic is likely to push between 110 million and 150 million people into extreme poverty by 2021, a third of these being in sub-Saharan Africa. The World Food Programme estimates that globally, the pandemic will double the number of people facing acute food insecurity by the end of 2020. These effects emerge from at least three sources: i) reduced earnings due to exposure to or fear of contracting the virus as well as associated higher medical expenses, ii) government restrictions on movement and economic activity, and iii) limits to access to food due to disruptions in markets and food value chains.

Our paper adds to the small but growing literature on the impact of the pandemic on household food security in sub-Saharan Africa, specifically rural Ethiopia. We assess the effectiveness of a social protection intervention — Ethiopia’s flagship social protection program, the Productive Safety Net Program (PSNP) — in mitigating these malign impacts at both the household and intra-household levels.

In August 2019, we conducted face-to-face surveys with mothers of children under the age of 24 months to assess how access to the PSNP had affected their food security and nutritional status. In June 2020, we re-interviewed approximately 1,500 mothers by phone. Our data, while not nationally representative, spans the four main highland regions of the country. Having access to pre-pandemic data allows us to assess the extent to which household food security and diets of individual members have changed following the start of the pandemic in Ethiopia. The longitudinal nature of our data, together with a sample that included both PSNP and non-PSNP households allows us to combine a difference-in-difference approach with a household fixed effect estimator, allowing us to control for a wide range of confounding factors.

Our respondents were reasonably well-informed about COVID-19. Virtually all (99.8 percent) had heard of the virus and 93 percent could identify at least one symptom. On average, respondents reported taking multiple actions to reduce the likelihood that they or someone in their household would contract COVID-19. These include washing hands for 20 seconds or more (82 percent), and, conditional on going out, avoiding shaking hands or kissing when greeting others (77 percent) or avoiding large gatherings or queues (66 percent). Market closure, fear of getting infected by the virus, high food prices and loss of income were the most important effects of the pandemic on livelihoods. Two thirds of our respondents reported that their incomes had fallen after the pandemic began.

We asked respondents about their ability to satisfy their food needs in the last three months preceding the June 2020 survey, compared to similar months the previous year. About half of the respondents reported that their food insecurity status had worsened, and the rest reported that it had remained about the same (Figure 1). The deterioration of the food security problem was greater in areas that are more severely affected by the pandemic. Households reporting that their food security situation has worsened are concentrated in zones with high number of COVID-19 cases. 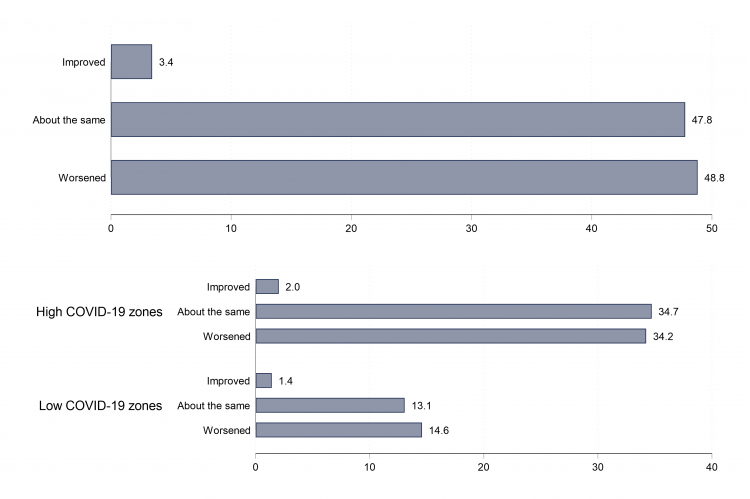 In evaluations of the PSNP, household food security is measured using a self-reported indicator called the food gap, the number of months the household was not able to satisfy its food needs. In both surveys, households were asked to report their food gap over the previous six months; data from the June 2020 showed that almost half reported that their ability to satisfy their food needs had worsened, largely driven by the sharp increase in food insecurity among non-PSNP households (Figure 2). The average household reported a food gap of 1.3 months in the August 2019 survey, but this grew to 1.6 months in June 2020. Non-PSNP households reported an average of a 0.5 of a month increase in food gap while the corresponding increase for PSNP households was 0.1 of a month.

Figure 2: Problems of satisfying food needs of the household 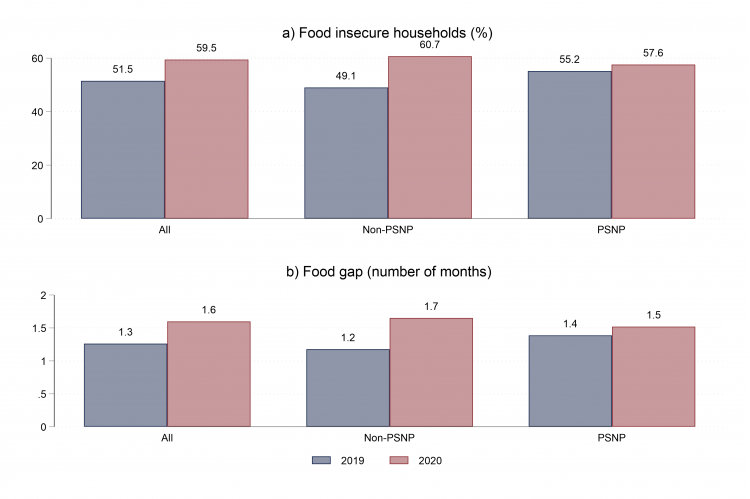 Our regression results indicate that household food insecurity increased by 11.7 percentage points and the size of the food gap by 0.47 months after the pandemic hit. Participation in the PSNP, however, offset virtually all of this adverse change; the likelihood of becoming food insecure increased by only 2.4 percentage points for PSNP households and the duration of the food gap increased by only 0.13 months. The protective role of the PSNP is greater for poorer households and those living in remote areas. Results are robust to definitions of PSNP participation, different estimators, and how we account for the non-randomness of mobile phone ownership. PSNP households are less likely to reduce expenditures on health and education by 7.7 percentage points and are less likely to reduce expenditures on agricultural inputs by 13 percentage points. By contrast, mothers’ and children’s diets changed little, despite some changes in the composition of diets with consumption of animal-source foods declining significantly.

Our findings highlight the value of having social protection programs in place prior to the onset of shocks in order to protect the food security of poor households. Social safety nets are complex to design and expensive to implement, especially at scale. Developing countries in particular often lack the fiscal space to do so, which had led to hesitation toward such programs. The COVID-19 crisis has reignited interest in social protection policies as instruments to enhance the capacity of the poor against catastrophic shocks. More than 200 countries have now implemented some social protection measure (Gentilini, 2020). Our findings lend empirical support to evolving arguments for expanding social safety nets to mitigate the adverse impacts of the pandemic.

The Nigeria Centre for Disease Control, NCDC has confirmed 655 fresh cases of COVID-19 in …